The Emperor’s Tomb Slot by Evoplay

Play The Emperor’s Tomb slots to uncover untold secrets and hidden treasures. Step into the shoes of an adventurous archaeologist and find all kinds of wonders in the tomb. This Chinese temple is set as a 5-reel online slot, with up to 9 paylines for you to win on. Experience a classic game with traditional bonuses such as Wilds and Free Spins. Use them to your advantage to ascend higher up the temple and access the legendary tomb. From there, you will find the biggest reward for them all. RTP is calculated at around 94%, with medium to low volatility. 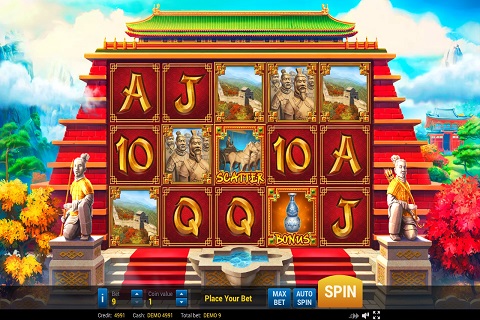 The Emperor’s Tomb online brings you a traditional slot game. Based on the ancient mysticisms of Chinese culture, the very game is set right in the heart of an old folktale. The setting is the Mausoleum of Qin Shi Huang, who was once known as the Emperor of China. It is said that this place holds much of his beloved treasures. Treasures that you will now find thanks to the game’s exciting features. According to the legends, it is said that the tomb is guarded by the Terracotta Army. Terracotta statues are one of the wonders of the world, where no one knows how they were made or why.

For the reel grid itself, you can see the temple in all its splendor right in the background. The red building has many layers that form the shape of a pyramid. In front of the temple are the two Terracotta statues that guard its gates. The gates themselves will be the representation of the reel grid. As you progress further into the game, you will head deeper into the temple. Unlock the gates as the bonuses reward you with more opportunities. They will let out an ethereal glow that basks your entire screen.

How to Play The Emperor’s Tomb Slot Game?

To win this free slot no download, you will need to start spinning the reels to gain combinations. The game works like any other modern, five-reel slot game. There will be combinations of at least three of the same symbol to get winnings. Special symbols will be around so that you can get bonuses. These will be represented by symbols more unique than any of the others. The minimum bet that you can place into the game is 0.10. The maximum amount you can bet in this game goes up to 500.00. You can use the settings to control the volume of the game or alter your bet how you wish.

Look at the paytable if you want to know more about the prizes. It will showcase exactly what each symbol is worth, as well as what the five-symbol combinations win you too. Currencies will differ depending on the localization. The Canada version will use Canadian dollars as an example. If you change your bet in any way, this will also affect how much the symbols will give you. Here is what you can win: 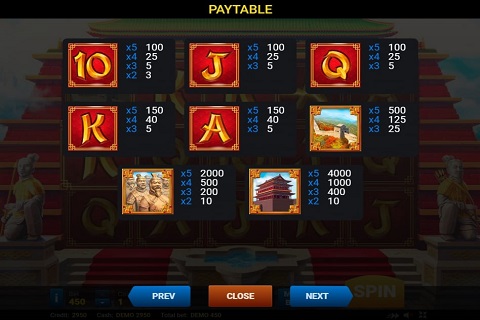 There are three different kinds of bonus symbols you can use in this game to earn a big win. These will be represented by golden barriers. Tear them apart so that you know when to get excited about a golden opportunity. The first is the Wild symbol. This will be represented as a stunning portrait of the Emperor. The Wild can substitute for all other symbols except for the Scatter. Use it to fill in gaps in possible combinations. Note that it can only land on reels 1, 3, and 5.

The second symbol to look out for is the Scatter. This is represented as the Emperor on a chariot. Landing three of these Scatters will award you with 15 free spins. Free spins can let you earn winnings and spin the reels without any additional bet.

The third symbol to watch out for is the Bonus Symbol. This is represented as the gourd, which is how they stored alcohol back then. These symbols only appear on reels 2, 3, and 4. Landing all three will activate the special bonus game. A bunch of doors will appear that you can select. One of them will hide the COLLECT function. The others will have additional prizes. Find as many extra goodies as you can before selecting the COLLECT door and end the bonus game.

If you want to make it big, try combining both the free spins and the bonus game. The bonus game can only be activated through the main game. The free spins will simply add more chances of accumulating more prizes. By triggering the bonus game, you can earn yourself a good amount of wins before using the free spins to get more. This way, you can collect a lot of wins without making any more bets. This can minimize the losses and maximize your total profit. The Wild symbol can also help in the regular game. It can be selected whilst playing both modes.

If you ever need to practice such a strategy, you can always try free play. This is a special version of the slot where you can play without spending any real money. Try the demo out if you ever want to learn the rules but don’t want to risk any losses. The free slot no download version can be found from the official site of Evoplay. It is also possible to find one when you are visiting the review pages like this one. Either way, you can get access to the demo and play for fun if that is what you are interested in.

Evoplay is a popular online software provider for many exciting titles. They have proven themselves to be incredible at their work, providing all kinds of games with special insights. They have adapted more gameplay features into their slots than any other provider. All of it can give you an extra layer of immersion as well as winning more money. Many popular online casinos in Canada have asked Evoplay for their content. You can take part in any promotion campaign which advertises their exceptional work. The contact page has an accessible package deal that can tell the casino everything it needs to know about its current projects.

While the game itself is simple enough, there are quite a few details that give an extra kick. The design itself is flawless, with references to ancient parts of the country’s history. You can find yourself with all kinds of wondrous opportunities with the bonus game, giving you a choice to take further risks with fantastic rewards, all the while climbing through the temple and immersing yourself in the culture.

Can you play the slot for free?

It is possible to play with no money using the demo. Find the demo on review sites or from the official website of Evoplay.

What bonuses does The Emperor’s Tomb have?

You can use Wilds for substitutions. Use the Scatter to get 15 free spins. Land the bonus symbols to open doors with extra rewards.

Can you play The Emperor’s Tomb for real money?

It is possible to play at online casinos with this slot machine. Simply deposit your money with registration and start playing.

What other titles has Evoplay made?