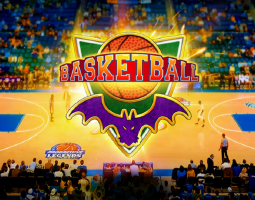 Evoplay Entertainment is an industry leader in the development of online slots, and Basketball lines up as one of its notable titles. The slot game is a popular pick for most gamblers thanks to its depiction of a sport that has a large fanbase the world over. The game serves the needs of slot enthusiasts that also have a special place in their heart for basketball. Even though the features of the game are shaved down to make it more of a slot than a basketball game, the theme is an impressive attraction since it is not covered widely in the industry. 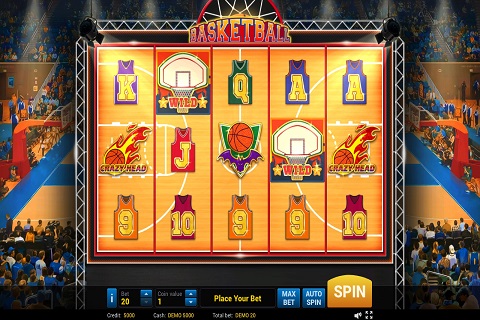 Basketball casino slot setting is everything one would imagine. The slot features a five-reel playtable that is designed to look like the aerial view of a basketball court. The sides of the grid are lined with metal bars as huge beams of light shine down on the colourful characters. The backdrop also passes on the theme of the game. The sidelines are filled with onlookers as they watch the action taking place on the field. Not much sound is included aside from the clicking of reels as they spin and cheering of fans once a winning or bonuses is landed.

Basketball RTP slot has a small range of bonus features that gamblers are rewarded at random. These offers are:

The bonuses in the slot are juicy, but the main course in the game is the payline wins. The formation of combos by three to five similar symbols triggers wins of varying values. The winnings are showcased in the paytable in the form of multipliers that apply to the line bet used. The paytable is as follows: 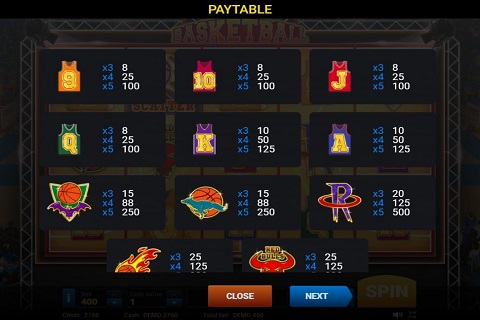 Slots boast a straightforward playing procedure, and the same is applied in this one. The process begins with the adjustment of the “Bet” section for the desired stake value between 0.1 and 500 credits. The curved arrows in the middle of the control bar play both the spin and autoplay functions. This simple approach can be assessed using the Basketball free play slot where no cash bets are necessary.

Basketball Slot is available for actual money gameplay as well. Some of the sites that accept cash bets include Spin Casino, Gaming Club Casino, and Betway Casino.

Evoplay Entertainment is a popular name in the online gambling industry. Even with barely 100 slots under its belt, the software developer establishes itself as a commanding force with revolutionary products. This provider is especially recognised for the production of the first-ever role-playing slot Dungeon: Immortal Evil. Other famous works of the developer include:

Basketball online slot offers a relaxing session without too much going on but with a unique theme that sparks interest. On our website, the game is available for free gameplay. Real money gameplay can be conducted in any of the gambling establishments that we suggest.

Is there a free version of Basketball online slot?

Yes, there is. The free slot game is available to players on our website. The demo slot version runs on fun credits that act as bets. Basketball wins are provided in the same way, which means they cannot be withdrawn. However, their random nature and amounts remain the same as those of the cash version. The variance is high, just like in the real money one.

Does Basketball Slot include a free spins bonus?

Yes, it does. The bonus is triggered when the scatter symbol occupies three spots anywhere on the grid. The character is denoted by a basketball flying through the air with flames ignited around it. 8 free spins are awarded in each round, and they can be retriggered if three more basketball scatters appear as the bonus plays.

Yes, it is. Basketball mobile slot is accessible by gamblers using smartphones running on popular operating systems to access the game. No Basketball download slot is available, and it is exclusively an instant play set like the PC variation. The mobile version offers the added upside of being able to launch the game anywhere and at any time.