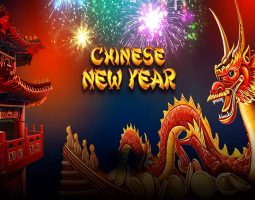 The Chinese New Year is among the largest global celebrations, even though it is mainly centred in China. Since the country’s calendar differs from the secular one used by the rest of the globe, it has a lot of attention drawn to it. This celebration is depicted in numerous sectors of the entertainment niche, including slot machines. The Chinese New Year by Evoplay Entertainment is one of them, and it delivers on the regional culture in both its appearance and bonuses. The game is an attraction for lovers of colourful gameplay and an array of bonus features, all of which feature in this Chinese New Year slot review.

Symbolism at Its Finest

Chinese culture is made up of deeply entrenched beliefs around images and other elements. The Chinese New Year game brings a lot of these items to life to depict the five reels and 25 play lines that are the attraction centre of the game. The slot’s colour scheme is mainly red, which is considered a symbol of good luck. The same symbolism applies to the red lanterns that hang from the roof above the grid. Buildings that showcase the beauty of architecture in the east grace the backdrop, and they are also decorated with the red shade and lanterns. A gold and red dragon sits at the bottom right of the reels as a symbol of power and wealth, which is what one hopes for when spinning slot reels. The game’s music has a traditional vibe that is meant to dazzle and encourage players to continue spinning the reels. 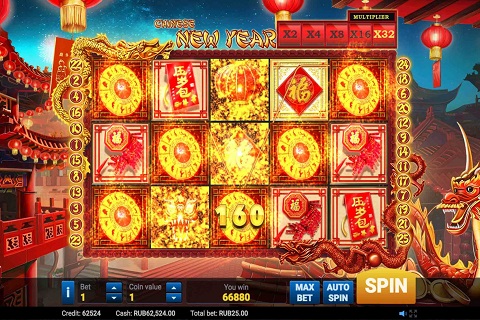 Chinese New Year casino slot has several bonus features for gamblers to wish they are lucky enough to land. These bonuses are:

The wild in Chinese New Year is a Chinese calendar, which resembles the zodiac one used by astrologists. The yellow symbol serves the common purpose of standing in the place of others next to it when it has the chance to complete a winning combo or make it bigger. This Chinese New Year bonus character is also capable of creating combinations of its own that pay as much as 40 times the line bet.

Chinese New Year online slot depends on symbol combinations as well to provide winnings. The combos are created by three to five similar characters when they appear on a win line. Here is an overview of the Chinese New Year wins:

The displayed values are multiplied by the bet when being awarded. A combination of five wilds awards the Chinese New Year jackpot win. 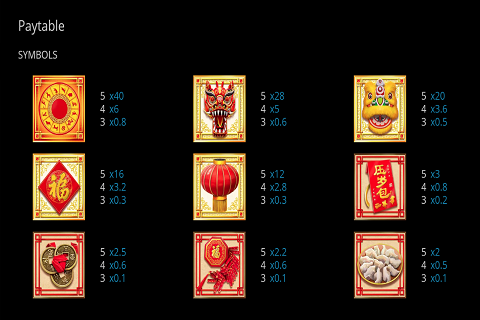 Playing Chinese New Year free slot consists of only selecting a stake and spinning the reels. The accommodated values lie between 0.1 and 500 credits while manual and autoplay spins can be used to activate gameplay.

Chinese New Year real money slot is available for gameplay in several casinos that support Evoplay Entertainment slots. On these gaming websites, punters are required to open accounts and deposit cash to access this version of gameplay.

Evoplay Entertainment is not a pioneer in the online gambling industry, but it has built a reputation as a trendsetter nonetheless. The provider is famous for the provision of 3D slots like Chinese New Year and numerous other innovative slots, instant games, and table sets. Charming Queens, Necromancer, and Journey to the West are some of the provider’s popular titles.

Chinese New Year free play slot takes you on a ride through everything the game has to offer without demanding any cash. Our website serves a perfect destination to engage the demo slot where it plays in instant play without registration being necessary.

Is a download necessary to play the Chinese New Year slot game?

No, it is not. Evoplay Entertainment uses instant play software in the creation of its slots, including Chinese New Year. The no download game is launchable on a wide range of web browsers, including Google Chrome, Mozilla Firefox, and Safari, among others. Chinese New Year demo or real money slot remains an instant-play game on both mobile and desktop versions. Its accessibility on both platforms and numerous internet browsers is thanks to its use of HTML5 technology. Accessing the titles requires a web connection at all times.

What is the payback percentage of the Chinese New Year Slot?

The Chinese New Year RTP percentage is 93.4%. This rate is on the lower side of the spectrum, considering the steady percentages range around 95%. However, the winnings are random and can result in big payouts. The Chinese New Year variance is medium to high, which suits high rollers that have sizeable bankrolls to proceed with gameplay during unlucky streaks. Nonetheless, the wide bet range makes it possible for low rollers to stretch their budget.

Yes, it does. The Chinese New Year slot payouts translate into actual cash when real money stakes are placed. This option is only available in online casinos after account creation and depositing of money. Such payouts are also offered when bonuses and promotions are used to launch gameplay. However, some playthrough terms may have to be met before withdrawals are allowed.