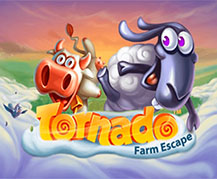 Tornado: Farm Escape is a classic slot game which has been released by NetEnt. This amusing slot game is an absolute delight for the farm animal lovers. This NetEnt developed game has 5 reels and 20 pay lines to play for. The graphics of the Tornado online slot game has been kept very simple and clear. The animations of the Tornado online slot game are so eye-catching that everyone would surely fall in love with the animated animals.

The Tornado online slot game begins with an introduction of a video where the animals of a particular farm are seen to be mourned over their every day’s dull work. The video proceeds with a sudden tornado being hit that farm and these creatures get swept away due to the force of the air thus getting a much required holiday break from their exasperating lives. This farming themed Tornado online slot game doesn’t make the player get bored because of its bright and funny graphics. As the introduction ends, the player is taken to the screen where the game actually is required to be played. The player needs to initially set the coin value by adjusting the number of coins needed to be wagered which ranges from 0.01 to 1 and then letting the reels to spin by hitting the green Spin button. Players can select the highest bet value by clicking on Max Bet button while to play the game without any interruption, Auto Play button is pressed.

A Host of Bonus Factors

The neatly plowed field which serves as the backdrop of the slot machine is surrounded by the farm buildings and trees to give the game a clean interface. There are ten interesting symbols which appear on the reels of the slot machine namely a chicken, a cow, a suitcase, a horse, a wellington boot, a radio, a sheep, a stool, a pig and an armchair. The wild symbol is represented by a television set where ‘WILD’ is written on the screen. There are hot and cold cloud symbols represented by the red and blue colored arrows in a cloud simultaneously on reels 1 and 5 which results in the triggering of the Tornado feature. This Tornado activates the symbol which appears on the 2nd row of the center reel thus collecting all the wild and active symbols. Besides this bonus feature, this slot game also has Storm feature which gets triggered randomly. The player can see the Storm to move one position at a time in any direction thus generating wild symbols until it moves outside the reels area and disappears entirely.

Tornado: Farm Escape is a high-quality slot game from leading gambling software designers NetEnt with interesting bonus features. The only disheartening thing about this game is that this game lacks the free spin feature. Apart from this, the bonus features of Storm and Tornado makes this game a bit more exciting to the players who like to experiment with different slot games. This game can be played both on the desktop as well as mobile version online.