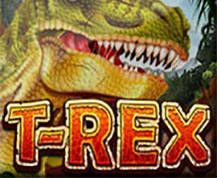 Dinosaurs were the most diverse group of vertebrates which this world has ever seen. These were not only ferocious by nature but also were magnanimously tall. Out of all the types of dinosaurs, Tyrannosaurus, popularly called T-Rex, was the tallest and lengthiest terrestrial one. Although they have become extinct now, yet their fossilized skeletons give us an idea to what they may have looked. Many films have even been made based on these dinosaurs under the famous series of Jurrasic Park. Seeing the immense success of the franchise, Real Time Gaming developed a slot game named T-Rex which takes the player to the prehistoric era.

The players can enjoy a wonderful gaming experience due its impressive background accompanied by the realistic sound effects, music, life-like images and pleasing graphics. T-Rex online Slot machine is 5 reels, 25 pay lines slot machine which is based on the theme of the dinosaurs. The T-Rex online Slot machine is classified as high volatility which means that the player is somewhat more likely to hit streaks of wins and losses than in an average slot game. Players can bet maximum up to 5$ per line thus allowing them to bet up to 125$ per spin. The coin values range from 0.01 to 5 which can be adjusted by clicking ‘Bet’ arrows. In this slot machine, players can even adjust the pay lines by clicking the ‘Lines’ arrows.

A player can press “Spin” button to start the game by spinning the reels once while by clicking on the Auto Play option, the player can enable the reels to spin to a certain number of times without interruption. Different symbols which can be seen in the T-Rex online Slot machine are the Volcano, the Dino Egg and a variety of prehistoric plant and dinosaur species from Stegosaurus to the dangerous T-Rex. Other than these, general card symbols like 9, 10, J, Q, and K are also present in the reels. For these symbols, players need to get only two of them in a row in order to trigger a win, though hitting three will result in a significant win. This slot game also has wild and scatter symbols too. T-Rex himself is the wild symbol which substitutes other symbols too and the Dino egg is the scatter symbol. If the player hits two or more eggs, it instantly triggers a win that ranges from 1 to 200 times the total amount wagered on the triggering spin.

T-Rex is an impressive slot game by Real Time Gaming with the bonus features and symbols. The best feature of this slot game is the feature of free spins which is triggered before one could get to the paytable. To reactivate free spins in the feature can be highly rewarding, but the standard game too is not far behind. The T-Rex(wild) symbol doesn’t appear very often, but the eggs(scatter) symbol makes it possible for the free spins to take into effect.