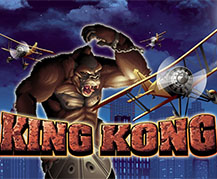 It’s very unlikely to say that no person in this world is unaware of the huge menacing creature named King Kong who is a gigantic ape. King Kong is often referred as the 8th wonder of the world. King Kong was first seen on the big screen in the year 1933 which showed the monstrous ape with its furious powers. After this film, there were several films released of this huge creature and thus King Kong became a series and the movie-lovers enjoys the films of this series a lot too. Peter Jackson made a remake of the 1933 classic film in 2005 which garnered good reviews from the critics too. Based on this game, a slot game was made for the online casino lovers.

Playtech developed a game named Kong: The 8th Wonder based on the 2005 film. It is often referred as simply “King Kong” among the gamers. The game will give a cinematic experience and with the incredible sounds, the player gets deeply involved in the game. The slot machine has two different game modes which the gamer can choose from namely Wild Jungle Mode and Dramatic Big City Bonus Mode. The first mode consists of two bonus rounds which can be easily triggered. Respin feature and Skull Island Bonus are two of the features of this mode. The first feature is activated by getting 3 or more King Kong symbols on the reels anywhere and will be awarded 3 respins while the second thrilling feature is Skull Island Bonus which is triggered by 3 or more scatters. Now the 2nd mode arrives after the player leaves Skull Island bonus round. This mode also comprises of two bonus rounds, the first being Wild Kong Respins while the second being City Tower Bonus. The former round is triggered if the player gets 3 or more wild King Kong symbols and can also receive 3 free spins too while the latter round can be triggered if the player gets 3 or more logo symbols of Kong. After all the bonus rounds, the game player will be taken back to the Jungle Wild mode again.

A Game which has lot to Offer

King Kong is a 5-reel and 20 pay lines slot game which can have a single coin per line. The coin size can vary from 0.01 to 2 which the player can wager for. The Auto Play option enables the player to choose from 10, 25, 50 and 99 spins. The symbols which are shown during the game play are the card representations of jokers, queens, kings, aces, four key characters from the film as well as the Kong itself. This slot machine has really a lot to offer to the gamers. The 2 types of modes of King Kong set it apart from all other slot games. The win sizes of this slot game are average and the slot game is mainly used for entertainment purpose only. We all know about the King Kong who climbs the top of the Entire State Building in the film, and with these types of games, it’s not far enough that Playtech will climb the top of the online slot game developers. If the person is new to the world of slot games, this game is absolutely the one s/he should try.