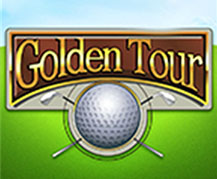 Golden Tour online slot invites you to a golf tournament! This time, you will spin the reels instead of hitting the ball. The prizes will be as good as an actual tournament. You can win up to 2.000 coins per spin. This classic video slot from Playtech includes 5 reels, 5 lines, and lots of fun. Read the review first, try the free slot version next, and continue your journey for real money: it is that easy! 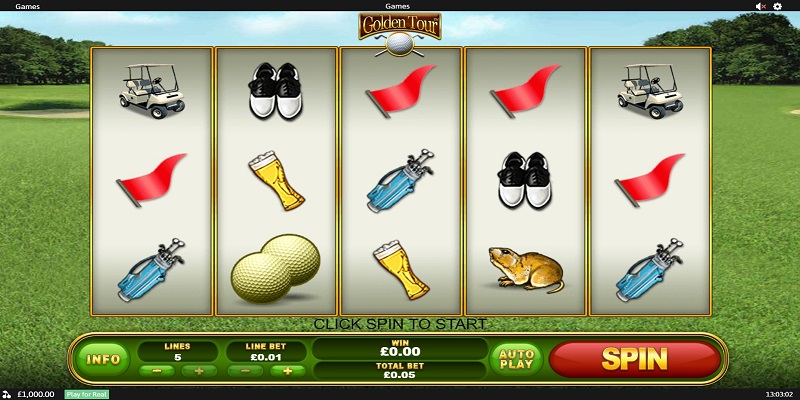 You should play Golden Tour if you enjoy simple yet profitable slot mechanics. This is an old game: do not expect shiny graphics, advanced animations, or innovative bonuses. Instead, you can expect fast gameplay, good payouts, and a low betting range. It is even possible to say that the Golden Tour slot machine falls into the category of “penny slots”. If simple rules and satisfying payouts are enough for you, this game will be a good choice. Otherwise, you should check the latest free slots of Playtech. You can find them on this site too.

The Golden Tour slot machine includes 9 symbols in total, and 2 of them have special features. Unlike many modern slots, it is enough to land only 2 same symbols side by side to qualify for a payout. There are no play card signs: all symbols are inspired by the theme.

The majority of the slot machines developed in the early 2000s had fixed paytables, and Golden Tour is no exception. The symbols always pay the same amounts (which can be seen in the table below) no matter what your bet levels are. However, all payouts are also multiplied by the “line bet” value, so playing with big bets is still important.

As mentioned above, there are two special symbols in the game, and they have the same features, whether you play the demo or try your luck for real. These symbols and their features are:

The bonus round offers you a “pick me” game. You are asked to choose three different golf clubs, and each of them reveals a different prize. Now, here is the tricky part: if you start this game with three scatter symbols, you will just collect what is revealed on the screen. If you start it with 4 scatter symbols, the payout will be tripled (x3). And if you start the bonus with 5 scatter symbols, it will be multiplied by 10 (x10). The Golden Tour slot machine does not have a free spin bonus like is usually the case, but the mini-game is surprisingly fun and rewarding. It is fast and offers the chance to win 10 times the reward – in a way, it is as good as a free spin bonus. 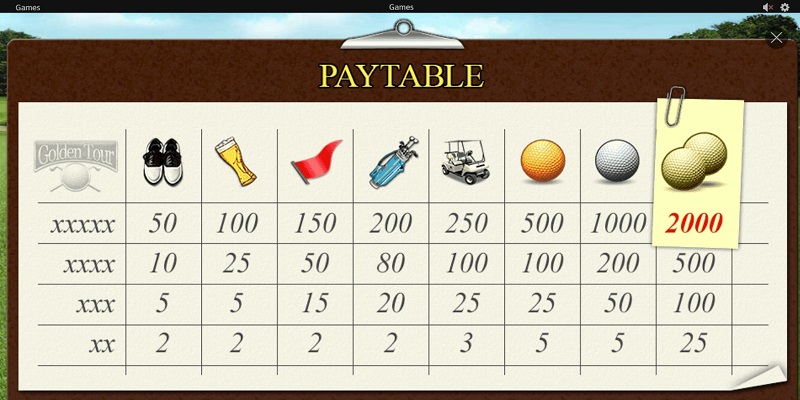 Use These Tips in Golden Tour Slots

Whether you try your luck in the free slot no download version or play for real, use these tips while playing Golden Tour slot machine:

About the Provider: Playtech

Playtech is one of the first iGaming developers. It was established in 1999. The headquarters of the company is located on the Isle of Man. Playtech is listed on the London Stock Exchange and develops all kinds of casino games, including online slots, online poker, online bingo, and sports betting. Its bingo platform is called “Virtue Fusion”, and the poker platform is called “iPoker”. Playtech is also known for its high-quality slot games, such as the Age of the Gods series and Buffalo Blitz.

A Golf Tournament for Canadian Players

This is a golf tournament for players from Canada, and you are invited too. So spin the reels right now, score a big win and return home with a trophy. The free play version of the Golden Tour slot requires no download and no registration. Just click the “play now” button and see for yourself! Golden Tour slot machine is not the only Playtech game on this site. Make sure to check the others too – all can be played for free!

Where can I play the Golden Tour slot for free?

Right here on this site. We have the free demo version of this game that can be played without a download & registration. Click the “play now” button, and that’s it.

Is there a free spin bonus in the Golden Tour slot machine?

No, but there is a mini-game instead. You are asked to pick three different golf clubs, and based on how many scatters are used to start the game, the payout is multiplied by 3 or 10.

Can I play the Golden Tour online slot on mobile?

Yes. While it is not a new game, Playtech released an HTML5 version of the game due to its popularity, and it runs on all kinds of mobile devices at the moment.