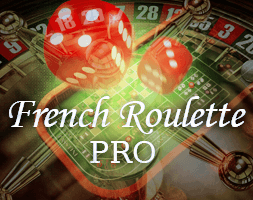 French Roulette Pro is an excellent European Roulette with superb graphics and gaming features. It originated from France just as the name suggests. It was developed by NetEnt and is a great enhancement of the popular Advanced Roulette games. Its interface is greatly simplified making it easy and convenient to play. This is a typical European Roulette with only 1 zero on the wheel, therefore, increases your chances of winning.

It is very popular across Europe and America due to this element. There is an amazing billboard feature which displays a lot of information about it. This includes the hot numbers, the cold ones, the splits between red and black, odd and even numbers and even the last 14 pockets the ball rolled into.

A simple gameplay is one of its greatest advantage. You can place your stake at 2 points; the normal table and the racetrack table which enables you to place bets according to groups relative to the numbers on the wheel. There are also rare bets such as finale bets, red splits and plain bets which are found on the special bets section.

There is an Auto Play feature which enables you to spin the reels continuously running the same bets. Moreover, you can select the normal or quick spins. The quick spin is much faster; the reel barely spins 30 degrees and a ball lands on the pocket.

Betting in French Roulette Pro is quite easy. There are chips that range from 1-100. You simply choose the value of the chip and select a winning position on the board. You then select the stake amount and spin the wheel. It comes with a special feature where there are grid lights as well as text description of the numbers you have chosen appearing on the screen. This makes it very easy to play without making mistakes.

There are about thirty six stops in the game and a single zero and there is an equal probability of the ball landing on any of them. Some of them have French names, well just as the name suggests, this is a French Roulette. You can place your bet on the following regions:

You can also place on one number, a combination of two, four or an entire column or row. The combination bets have lower odds compared to single number bets. However, the chances of winning are higher.

What Are the Wagers?

The game is rewarding just as it is interesting. It has a minimum bet value of 1 and a maximum wager value of 100. It boasts of a return to player rate of 97.3% which is quite high. This is one of the reasons why it remains one of the most popular games.

Outline of the Possible Bets

The highest amount of cash is won with the single number bets with exemplary odds of 36:1. You can win big with such odds but the probability of winning is much lower. The combination bets of two numbers have relatively high odds too of about 17:1. Basically, the fewer the staked numbers, the higher the odds but the lower the chances of winning. This applies for the larger special bet combinations.

What Are the Bonus Features?

The best feature unique to this game is the La Partage rule which states that if you hit an even money wager and the ball hits zero, you do not lose all your cash. You only lose half the amount of money. This significantly reduces your chances of losing your money.

Roulette is an interesting game that is based on luck but there are strategies that can optimize your chances of winning. It is not the game that awards huge jackpots.

Variants of the Game?

This game is comparable to other types of roulette. It has a single zero which distinguishes it from the American Roulette and this makes it more rewarding but it is a typical French Roulette. The La Partage rule is the most distinguishing factor for the French Roulette Pro.

What is the Original Version of the Game?

The French Roulette pro is an enhancement of the European Roulette. The game can be played in nearly all land and online casinos and it is highly rewarding compared to others. It is quite similar to the European one with only slight differences.

What Must You Keep Away from?

Roulette is an interesting game that can be quite addictive. You should avoid betting big especially on the high odds because the winning probabilities are low. Stake low or moderately high so as to keep playing. Practice responsible gambling at all times and only stake what you can afford to lose.

Roulette is originally a French game and the word actually means little wheel. It decreases the house’s edge from 5.76% to about 2.7% hence offering players a higher chance of winning.

This is among the most popular games because it gives the players an edge over the house. It is highly rewarding and can be a great leisure activity. Its simple gameplay and superb graphics make it even more exciting. It also gives you a chance to learn some French!