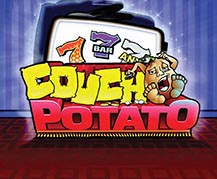 The Couch Potato slot game is developed by the provider Microgaming. It is a cartoonish game with a potato as the main character. The potato is sitting lazily on the couch. Generally, the term couch potato means a person who has a lazy attitude and does not do any work. However, Microgaming has turned the negative concept of couch potato into a positive concept by developing the Couch Potato slot machine. Here even the laziest person can win loads of real money. The slot has simple gameplay consisting of 3 reels along with 3 rows. Moreover, the game has only one payline, so you don’t have to worry about selecting lots of paylines.

The Couch Potato RTP rate is 97.43%, so winning money is pretty feasible. Furthermore, you can try the slot without downloading. It is a free slot no download. So you do not have to download the game as you can try it directly from the online casino site.

The Couch Potato casino game is an easy slot with a 3×3 reel grid. In the recent world of slots, many game providers try to make contemporary slots with multiple reels and rows along with a huge number of paylines. This results in complicating the game, and amateur Canadian players might find it scary. Thus, they shy away from gambling. However, it is not the case if you play Couch Potato slot due to the easy gameplay. The slot is very interesting as you can wager 1, 2, or 3 coins on a single payline. Moreover, the winning values are also different according to the number of coins you have on the bet.

Moreover, every player from Canada and other places can play the demo or free play version of the slot without paying money in an online casino. Another benefit of playing the Couch Potato slot is that you can play it from all kinds of mobile devices. So you do not need to be at home while playing the free or full version of the Couch Potato slot game.

The Couch Potato slot is full of numerous high-paying symbols. Moreover, the values are different for the coins you wager on the payline. Some of the symbols in the slot machine are as follows: 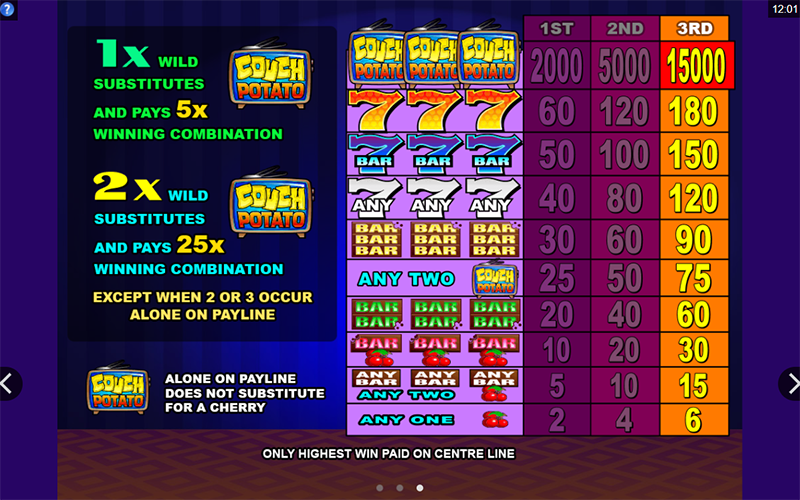 The Couch Potato has minimalistic classical slot gameplay, so it has few bonus rounds or promotions. Among the special symbols is the wild symbol that also acts as a multiplier. Some of the special features of the slot are as follows:

Moreover, it creates its win if multiple wild symbols appear next to each other on a payline with one of the wild symbols displayed on the first reel. However, these wins are not multiplied.

It is very easy to play and win the Couch Potato slot game if you know some tips, strategies, and tricks to play slot games. You can see these strategies and tips to play below:

The Couch Potato slot game by Microgaming is an easy to play slot as it has 3 reels and the same number of rows along with a single payline. However, there are many ways to win money, like the wild symbol that can also act as a multiplier. The RTP of the slot is 97.43% which means you can win pretty generous payouts. Although there are not many bonus rounds, you can win money using the wild symbol. It is one of the best slots for players who want to play a fun game of slots. Online casinos Couch Potato popularity is well deserved. You can also check the website for reviews of other popular slot games.

How many reels and rows are there in the Couch Potato slot?

The slot has a 3x3 playing grid with a single payline.

Is there any jackpot prize in the Couch Potato slot?

Unfortunately, there are no jackpot prizes in the Couch Potato slot.

What are the special features of the Couch Potato slot?

The special features are wild symbols and quick-spins.

How can you win real money from the Couch Potato games?

If you create an account in a casino and play the slot after depositing some money, then you can win money.

How to try the Couch potato without paying any money?

Many casinos have the demo or free version of the slot. So you can play the demo version for fun without paying any money.