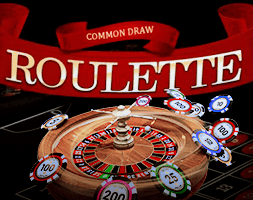 Common Draw Roulette by Betsoft is a type of European Roulette that consists of 36 numbers that you can land on and win big. It has only one zero thus increasing your chances of winning and reducing the house’s advantage over the players. It utilizes the classical rules. It is uniquely a multi-user game type which simply means that you gamble with other punters on the same table.

How do You Play the Game?

This is a multi-user game which varies slightly from other variants.

What Are the Wagers?

The stake amount per spin ranges from 3 to 500 credits. You can use the five hundred, one hundred, twenty five, five or one credits in the game. Both the usual outside and inside ones are acceptable but there is no call bet. However, the sectors and neighbors’ bets are available in the special tab option. It has an RTP rate of about 97.5%.

Which Bets Are Available?

There is the single, combinations of two, four or six, 1-18, 19-36, odd, even, red or black, column or row bets available. The single number have the highest odds of about 35. The combination of 2 have odds of about 17 because they have higher chances of winning. The more the numbers the lower the odds.

What Are the Bonus Features?

There is no progressive bet, special bonuses or jackpots for the Common Draw roulette. However, there are lower chances of losing your money because of the single zero compared to the American Roulette with double zero. In addition, you do not lose money when the ball lands on a zero when placing an even bet. You get half the stake amount.

Roulette is not a game of huge jackpots and large winnings. You make small wins progressively which eventually become big. Hence, you should not stake big on a single number bet and end there. You would rather stake low on the combination bet and stand higher chances of winning. You can attempt the single number bet once in a while and try your luck. This one is based on luck hence there are no sure win strategies.

What is the Original Version?

The European roulette is the original version of the game which varies from the famous American roulette which contains 38 numbers which include 1 to 36 and two double zeros. It is available in nearly all land and online casinos. It uses the classic roulette rules.

What Are the Gambling Vices to Avoid?

This game should be fun and exciting and not a matter of life or death. The money you gamble with should not be meant for other purposes. Responsible gambling is the only way to enjoy gambling. Secondly, do not over-rely on the single number bets because there are low chances of winning. The larger combinations give you a higher chance of winning.

The roulette game is referred to as the Devil’s game because the numbers total up to 666. The game gives you an edge over the house of about 2.7%. There are people who claim that it is possible to predict where the ball will land but this is still a speculation.

This is another game that you certainly must play. It gives you the multi-user gambling experience which is unique from the rest.