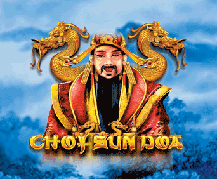 Choy Sun Doa slot is an online slot machine developed by Aristocrat that met nothing but positive feedback and manage to satisfy anyone who at least gave it a shot. Aristocrat is a company known for bringing something new and upgrading their previous releases constantly, which is exactly what they did this time.

The developers used Chinese culture as an inspiration, which is always a very well accepted theme amongst gamblers not only from Asia, but also all around the world. It has adjustable reels, up to 243 pay lines and much more.

Yet another proof of how creative Aristocrat’s development team is. By reducing the amount of reels and fields on the machine active, you are also changing the ways to win system.

Depending on how many reels are active, gamblers may switch between 3, 9, 27, 81 and 243 ways to win systems based on 1 to 5 reels active respectively. The online Choy Sun Doa slot machine might be a little bit more complex than the other new games from this year and that is why going through the paytable, where all basic and advanced information can be found, is highly recommended.

Changing the amount of reels and ways to win along with the bet value also affects the total stake. The minimum possible one is $0.01 while the maximum sits at $62.50 where all fields and 243 ways are active.

Slots Machines Choy Sun Doa has both free spins and bonus addition integrated into one feature activated by landing three or more scatter icons. As soon as scatter connect, a new screen appears and gamblers are offered 5 bonus round choices.

5 Free Spins with all wins that include wild multiplied by x10, x15 or x30 is the first option followed by the purple round which offers 8 costless swirls and multipliers at x8, x10 or x15. The last three increase total gratis rolls but reduce the multipliers gradually, you get the idea. All five options are shown in details in the paytable.

Additionally, any bonus symbols during free spins on the first and the last reel award a random amount of 2, 5, 10, 15, 20 or 50 coins. Keep in mind that RTP remains the same no matter which bonus round you choose to play.

Aristocrat implemented the good old gamble feature where players can double or quadruple the prize. It is extremely useful for both high rollers, who can double once and win big, and low bettors who can increase the prize by x2 or x4 multiple times gathering a huge outcome.

The process is very simple, as you have two options:

Players are allowed to bet up to $1000.00, but keep in mind that one wrong guess erases all prior winnings and leaves you with nothing, and taking the initial prize might be a good move sometimes.