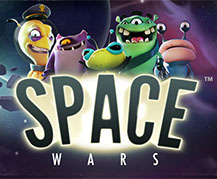 Coming from one of the most popular companies in the online gambling industry – NetEnt, we have a brand new machine titled Space Wars slot. It is quite a refreshment to see a game like this, with an additional row and crazy colorful aliens jumping all over the reels.

NetEnt is a well-known firm because of their creativity when it comes to making brand new slot machines. This time we have stacked symbols, on-win re-spins and much more!

Nowadays, developers are making old fashioned 5 by 3 games, but not NetEnt. Even though there are still 5 reels, there is an additional row which, surprisingly, didn’t lower the RTP. The theoretical return to player sits at 96.8% and is more than enough for a machine with 20 fields.
There are 40 paylines, which is reasonable, and they are fixed. Not allowing gamblers to change the amount of active patterns was a good move as the final stake is effected by 2 optional parameters:

The players can change the bet level anywhere between 1 and 10, while the coin value varies from 0.01 up to 0.50. That brings us to the minimum final stake which is $0.40, while the maximum goes all the way up to $200.00! That range satisfies both low bettors and high rollers, allowing anyone to find the perfect sized wager each round.

Not only that symbols alien symbols are extremely well and uniquely designed, but they can also appear in groups, thanks to the stacked symbols feature. Online Space Wards slot machine also features stacked wilds and even though they can only appear on reels 2 and 4, they are very helpful.

Five icons representing baby aliens all have lower value, while the bigger ones also bring bigger value to the table. The most valuable regular sign is different than the others which makes it easy to see, and is represented with red crystals. Five of those can bring you a prize of 1000 coins! All icons require at least three of a kind to connect on an active payline in order to trigger the instant cash prize.

You might have already noticed a space tube sitting right next to the reels which is where all connected alien symbols get teleported after combining. The feature is called the “Initial Re-Spin” because every initial win activates it.

Slot machines Space Wars re-spin plays at the same bet size as the initial roll that triggered it. Note that the feature cannot be re-triggered even if there are winning combinations in the re-spin.

Combinations formed by the help of the Wild icon also activate the Re-Spin and wilds can still appear both individually or stacked during the re-spin round.

Even though NetEnt did an incredible job in terms of design, the game still lacks multipliers, unique features and full sets of re-spins, but RTP of 96.8% is the reason why you should at least give it a try.