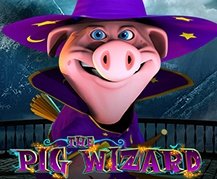 He is both a pig and a magician: this little piggy fulfills all your wishes and awards you shiny gold coins! Developed by BluePrint Gaming, the Pig Wizard is a very fun slot machine game with cartoon-like graphics. The game, which also features a non-progressive jackpot pool, promises both amusing hours and high-profit rates. Because it is one of the next generation slot games, it can be played on all mobile devices like Amazonia slot machine. To play Pig Wizard slot machine, you do not have to pay anything, download or register. You can start playing in your browser or on your mobile device within seconds.

The Pig Wizard slot machine has a very colorful interface, which represents the “working area” of a magician. You can see the main controls at the bottom. After placing a bet, simply hit the “spin” button and watch the reels turn. There are 5 reels and 20 pay lines in total. You are aiming for at least 3 same symbols, which must land on the same pay line. The more, the better: the award you are entitled is determined by the number of symbols you place on reels. The game supports auto-dialing, and it is possible to automatically spin the reels until a bonus feature is activated. As well try to play free diamond game.

There are 10 symbols to look for. They all are shown with magic related pictures, and some of numbers and letters. The picture symbols have high payments, as usual. Check the paytable by hitting the same-named button and see the full list. As you can see, the highest prize you can win is 20.000 coins. Although, it is mandatory to place the maximum bet to win this reward. Paytable changes according to bet levels, and this is a good thing if your budget is limited. Free Pig Wizard slot game can be played with either 0.20 coin or 20.00 coins per spin.

There are two different bonus symbols in the game, which are wild and bonus. Among them, the bonus symbol is especially important because it is used to activate multiple features. Let’s take a closer look:

Wild Symbol:Shown with the pig wizard picture with a “wild” sign. You can use the wild symbol to substitute others. So if only one sign is missing in a winning combination, the wild symbol can replace it. In addition, it is the most valuable symbol because wild pays up to 20,000 coins if you manage to land 5 of them at the same time. Enjoy for such amazing game like mega jack free play.

Bonus Symbol: This one, shown by the “bonus” letter, appears only on reels 1, 3 and 5. At least 3 of them are needed to trigger the feature, which takes you to another screen. There is a treasure map on this screen and 4 different rooms to choose from. Each room starts a different bonus round. These are:

If you are lucky enough, you can also win the gold jackpot during these rounds and get a big prize.  Remember: you can play Pig Wizard slot for free and still enjoy these features.

How to Play Pig Wizard Slot in UK

The Pig Wizard slot machine game can be played from South Africa, New Zealand, Canada, United Kingdom and lots of other countries. To see the online casinos offering this game, just click the “play now” button.