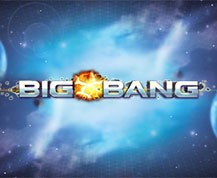 A slot game developed by NetEnt based on the theory of Big Bang is sure to amaze any player who is likely to play this space-themed game. Big Bang is such a graphically precise slot game that it has been regarded as one of the best playing space games. This slot game must not be confused with the popular television series The Big Bang Theory as it shares no connection with the game. NetEnt has launched this new frontier-breaking sci-fi slot game with an increasing multiplier of up to 32x, which is set to change winning schemes for players, providing new ways to gamble without the need to hit a special pay line combination or triggering a particular bonus feature.

An Ensemble of Dazzling Symbols

Big Bang is a slot game which features interplanetary concept that showcases the space-based aspects such as stars, planets, etc. The slot game has a cosmic appearance and has been designed to ensure that the player experiences a different kind of fun game. Big Bang has 5 reels and 25 pay lines slot machine. The symbols one would usually find here are the regular card symbols like 10, A, J, Q and K which actually radiates in the colors of ruby, sapphire, emerald, amethyst, and gold. This slot machine also consists of other symbols like planets, moons in their actual colors. Of course, the wild symbol present in the slot game increases the winning chances. The glowing, spiraling sun is the Wild symbol which substitutes any other symbol on the pay line thus making this game one of the easiest ways to get more coins. The player can find him/her to be lucky enough if five of the Wild symbols appear at once which results in the payout of 1000 rewarding coins. The player can even bet the highest bet through the Max Bet option.

Although this slot game lacks any bonus feature, yet Big Bang has done a marvelous job to keep the game so joyous to play which makes this game a unique one from the others. It is great that this slot machine gives an opportunity to increase the earnings massively yet if one is unable to get a winning combination, the player has to start it all over from the beginning. Before taking a ride into space, the player can alter the bet level by adjusting the arrows of the Level selector. The coin value ranges from 0.01 to 5 and can be adjusted by pressing Coin Value button. The Spin and Auto Play feature enables to start rotating the reels and let the player to player without any interruption respectively.

This slot game looks really interesting and unique and it is worth giving a try. But I really think you need to be lucky to get big winnings there. Good thing is that even without any bonus round, this slot game doesn’t get boring after a while. But having no bonus round it doesn’t entertain the players so much.